Discover the Wine Regions of Spain with Tipoa Car Hire

There are sixty plus wine regions in Spain producing a comprehensive array of different wine styles.

Improvements in Spanish viticulture and winemaking over the past two decades has lead to a marked improvement in quality across the board.

A Quick Tour of the Wine Regions of Spain:

Navarra
Also in the North of Spain is the wine region of Navarra, named after the province known in English as Navarre. It is overshadowed by Rioja, it's southern neighbour. Garnacha is the traditional variety used here but Tempranillo is increasingly used. Red and rose wines are made with these varieties and some white wines are produced from Macabeo and Chardonnay.

Rioja
The Rioja region straddles the Ebro River in the northern part of Spain's Meseta or central tableland. It is Spain's leading wine region producing mainly red wines from the Tempranillo grape.

Penedes
Penedes to the south-west of Barcelona is best known for the production of Cava, Spain's sparkling wine. Still white wines made from Chardonnay and other varieties as well as red and rose wines, often made from Cabernet Sauvignon are also produced here.

Jerez
In the South of Spain is Jerez in sun kissed Andalucia is world famous for its sherry. These beautiful wines are not the only treasure to be found here. Jerez also lays claim to being the originator of tapas, the delightful small smacks that have taken the world by storm, and an indispensible accompaniment to sherry.

These are just a few of the sixty or so Spanish wine regions. All are undergoing modernisation and improvements as they compete in the world market.

You may need to fill up the tank before returning a rental car at this airport following the "full out/ full return" fuel policy. In this case and in your interest, there is Galp petrol station opposite the new terminal building.

2. If you already drive on the N332 from any direction and heading the airport, just take the exit to the airport through the N338. 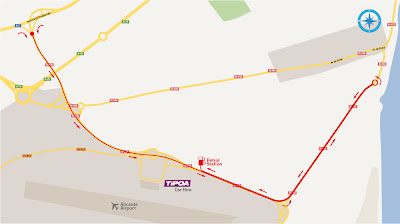 Mrs Tip
Posted by Tipoa Car Hire at 02:14 No comments: