US airline Delta has diverted flights on routes across the polar regions as radiation from a massive solar storm batters the Earth's atmosphere.

The radiation storm has caused dramatic displays of the aurora borealis (the Northern lights) but there are also fears it could disrupt communications, damage satellites and cause power grid outages at northern latitudes.

Atlanta-based Delta said it had altered the course of some flights between Detroit and Asia to avoid communications problems from the storm.

Airline spokesman Anthony Black said. "We are undergoing a series of solar bursts in the sky that are impacting the northern side of the world.

"It can impact your ability to communicate," he said. "So, basically, the polar routes are being flown further south than normal." 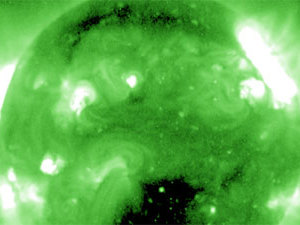